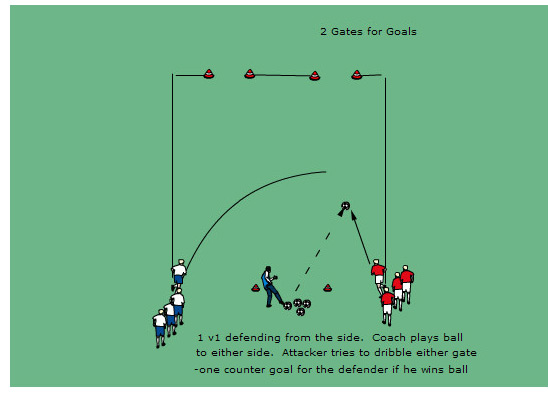 The Set-up: Field should be approximately 30 yards long x 20 yards wide. Set up two 2 yard gates at one end of the grid and one 4 yard gate at the opposite end. Divide the players into two teams.

The Exercise: Coach begins with all the balls. When he/she plays a ball out the first two people in line come out creating a 1v1. If the red player gets to the ball first, he attacks either of the small gates. White needs to make a recovery run to take away the closest goal and force a cut back. If White wins the ball he should try to play through the larger gate in as few touches as possible. 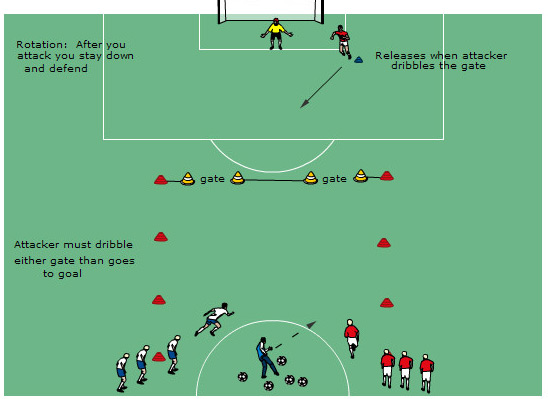 The Set-up: (as pictured). Have a player or two positioned at the blue disc (side of the 6 yard box) to become an additional defender.

The Exercise: The same as the initial exercise except both players in the 1v1 are trying to dribble the small gates. Now when one player dribbles the gate a new defender becomes “live” and another 1v1 ensues, this time to goal. When the defender (defending the goal) wins the ball the exercise is over.

Note: You are only allowed to attack the big goal if you successfully dribble the gate. The defender, who gets beaten through the gate, can no longer defend. If the ball goes out of bounds the coach plays a new ball out and two new players begin the exercise.

Rotation: After a successful attack (one that finishes with an attack on the big goal) the attacker stays down to defend the big goal. The defender now rejoins his team beside the coach.