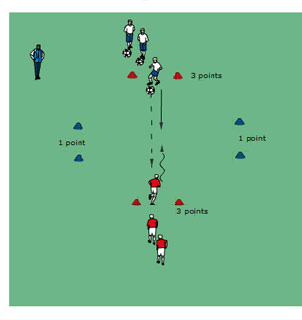 Set-up: Two teams play in a 15×15 yard grid with four goals approximately 2 yards wide.  One team begins with all the balls.

The Exercise: Player in White passes the ball across to the player in Red, and moves out to defend.  The player in Red can attack the lateral goals to the side for 1 point or try to “beat the defender” and score through the goal behind the defender for 3points.  If the defender wins the ball he should try to attack any goal with the exception of his own.

The White team should pass and defend for 3 minutes than switch roles.  Allow each team to go twice to see whether they improve in recognizing which gate to attack.