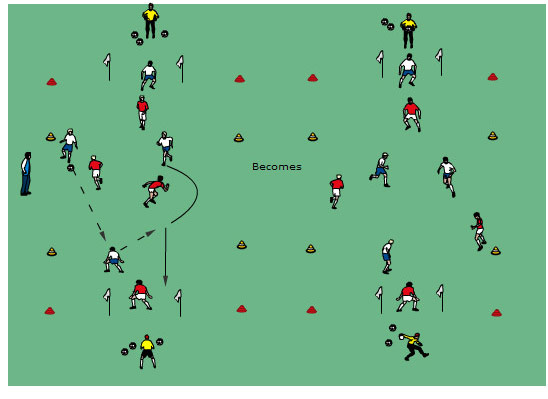 The Set-up: Field should be approximately 40 yards long x 20 yards wide. There should be a designated 20×20 central zone where a 2v2 is taking place (marked out by yellow discs). 4 players in red, 4 in white with two goal keepers/servers (don’t have to be keepers, but this is aexcellent exercise for distribution) that are off the field. The keepers should have plenty of balls (as pictured).

The Exercise: 2 White players play vs. 2 Red players in the central zone. Both teams have a target player in their attacking third of the field and a 4th player who serves as a goalie. The white players’ in possession, pictured left, try to enter the ball into their target player and transition to support. The target player is not allowed to turn with the ball. Every time a goal is scored or the ball goes out across an end-line, the goalie behind that end-line puts a new ball back in play for his teammates (pictured right). You must play into the target before shooting. The target player can move anywhere in the attacking zone, but cannot enter the middle zone. When the ball is played into the target player all players from the central zone are allowed into the final 3rd of the field.

The 2v2 is live! If Red wins the ball they try to play through their Target player and support quickly.