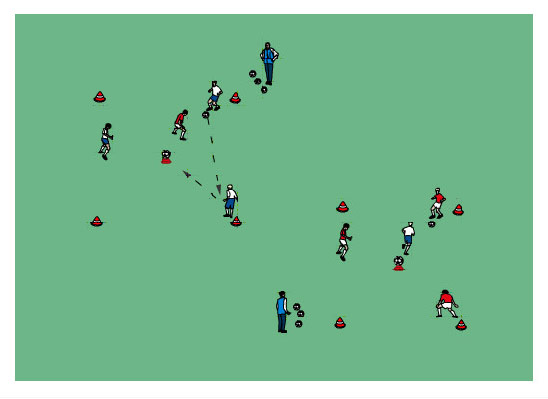 The Set-up: Grids should be roughly 10×10.  4 players in each grid play a 3v1 (as pictured).  There should be several balls by each grid.

The Exercise: 3 players attempt to keep the ball away from 1 defender inside the grid.  The defender needs to protect the ball placed on top of the central disc.  Coach should ask that the defender not remain closer than a yard to the ball.  How to score? The 3 players attempt to score by knocking the ball off the disc.  The defender can score by gaining possession of the ball.  After 60 to 90 seconds, have the players that defended rejoin their box and two new players switch grids to defend.

This is a nice variation to the typical 3v1.  It increases the amount of movement while making the exercise more competitive and enjoyable.

Note: Coach can restrict touches, increase or decrease the size of the grid depending on ability of the players.