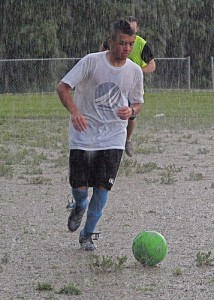 Use the 30-30 rule to determine the threat of lightning in your area. Clear the field if conditions are unsafe. Under no circumstances should you try to ‘get the game in’ unless the 30-30 guidelines are followed.

30 seconds: Count the seconds between seeing lightning and hearing thunder.  If this time is less than 30 seconds, lightning is still a potential threat. Seek shelter immediately.

30 minutes: After the last lightning flash, wait 30 minutes before leaving shelter. Half of all lightning deaths occur after a storm passes. Stay in a safe area until you are sure the threat has passed.

Thunder is the noise caused by the explosive expansion of air due to the heat generated by a lightning discharge. Thunder may have a sharp cracking sound when lightning is close by, compared to a rumbling noise produced by more distant strokes. Because light travels at a faster speed than sound, you can see a lightning bolt before the sound of thunder reaches you.

To judge how close lightning is, count the seconds between the flash and the thunder clap. Each second represents about 300 meters. If you can count less than 30 seconds between the lightning strike and the thunder, the storm is less than 10 km away and there is an 80 percent chance the next strike will happen within that 10 km. If you count less than 30 seconds, take shelter, preferably in a house or all-metal automobile (not a convertible top) or in a low-lying area.

Lightning may strike several kilometers away from the parent cloud and precautions should be taken even if the thunderstorm is not directly overhead. If caught outdoors:

Note: Persons who have been struck by lightning receive an electrical shock but do not carry an electrical charge and can be safely handled. Victims may be suffering from burns or shock and should receive medical attention immediately. If breathing has stopped, mouth-to-mouth resuscitation should be administered. If breathing and pulse are absent, cardio-pulmonary resuscitation is required.