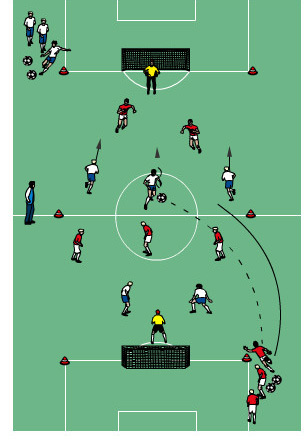 The Exercise: The exercise begins with a red player serving a long ball into 3 white attackers. The white attackers should control the ball quickly and attack two red defenders at speed. The red player that served the ball should immediately make a long recovering run in an effort to make the 3v2 situation turn into a 3v3. If red wins the ball they should try to play the ball to the coach who is positioned out wide at the half way line.

This is a very demanding exercise, but a great exercise for an 11v11 team.