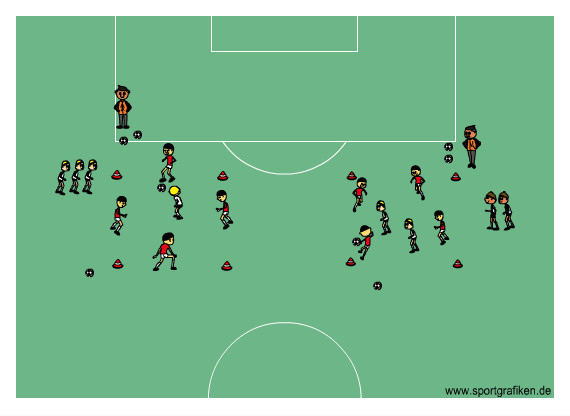 The Set-up: Grids should be roughly 10×10. (Coach should set-up more than one grid)
4 Red players play keep away versus 1 white player in each grid. Three additional white players should be in a line on the outside of the grid. There should be several balls by each grid.

The Exercise: 4 players attempt to keep the ball away from 1 defender inside the grid. Once they complete 5 passes an additional defender joins the game, creating a 4v2 (pictured right). If the Red players can connect 5 more passes a third defender joins the game (4v3). Can any group get to 4v4? Can a group of 4 connect five passes in the 4v4?

If the defender wins the ball, the team of four quickly gets a ball back in play and a new defender enters the box.

Play for 3 minutes and then switch roles. You should play four rounds (two possessing, two defending).