The Exercise: The Coach calls out colors and the back four and keeper should take up defensive positions as if the ball was in that location.  Each time the coach calls out a color the defense should quickly react (game speed).

Note: Coach should observe the speed of the shift, the pressure to the ball, the covering players’ position, the balance on the weak side.

After a series of movements the coach should play a ball in behind the defense and observe the recovery.  The back four & keeper should quickly look to build out the back and play through either gate.

Progress to (above left):

The initial exercise of reacting to the coach’s command remains, but now when the ball is played in behind the defense two forwards apply pressure.

Progress to addition of Midfield (above right):

The Exercise: The ball now begins with the keeper.  The backs should widen out to make themselves available as if we were looking to play out the back.  The keeper should play the ball deep to one of the opposing midfielders.  The white team should quickly “pinch in” and “step up” to limit the attacking teams space.  Play is live on the keepers’ service!

Note: The coach should take up a position behind the back four to observe the defensive movement. 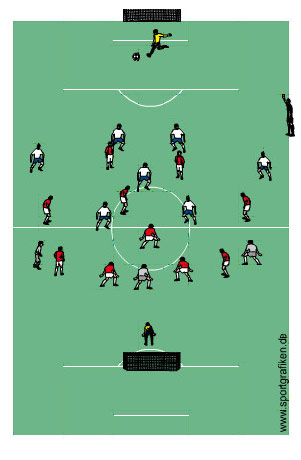 The Exercise: Two teams of 11 play on a field penalty box to end line.  The white teams forwards (pictured in grey) are not allowed to defend creating an 11v 8 situation in favor of the red team.  This will force the white team to keep its shape and move as a unit.

When white win the ball and can connect a pass they are “shadow to goal” (red can’t defend).  This will teach the white team to play in quick patterns and take space as they move forward.