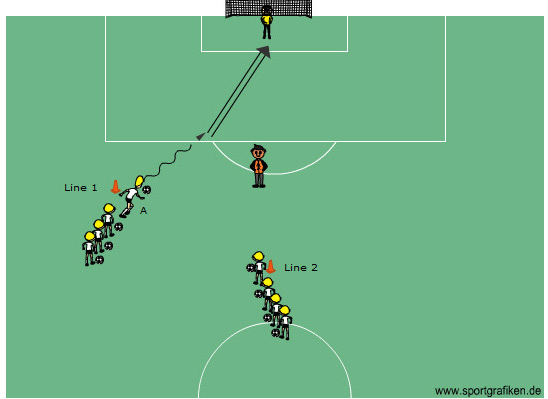 The Set-Up: Divide the team into two lines (Line 1 & 2). All players should have a ball. The coach stands approximately 7 to 10 yards in front of line 2. Goalie should be in the net. 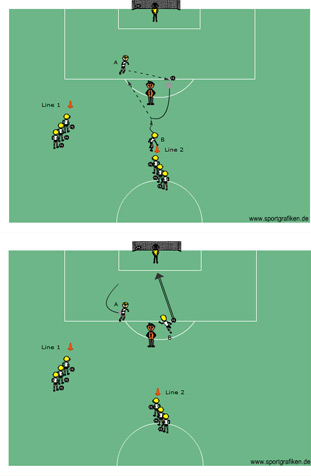 The Exercise: The first person in line 1 (player A) dribbles at speed takes a shot on the goal. Note: Coach can designate a spot that the player must shoot from, example- the penalty spot or top of the 18 depending on ability level. Once player A shoots the first person in Line 2 (player B) begins to dribble at the coach. Player A should now show back to the ball for a wall pass. Player B should pass the ball to player A and move “off the coaches shoulder” for a return pass.

Note: It’s important that player B starts with the dribble. In the final third of the field, space gets very limited as defenses become more compact. You want player B to commit the defender (the coach) prior to releasing the pass.

Player A should play a return pass to Player B and spin away and follow in for a rebound.
Player B should shoot as quickly as possible, preferably on the 1st or 2nd touch.

The next player in Line A should begin to dribble at speed once the previous group has completed its turn.
Players should switch lines after each turn.