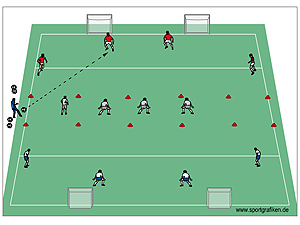 The Set-up:  The field should be approximately 40 yards long x 35 yards wide. Create a 5 to 7 yard middle zone.  Place two pugg goals or gates on each end-line (as pictured). Coach should have a supply of balls. The team should be divided into three groups of four. Coach can adjust the number of players and space depending on the player’s ability.

The Exercise:  Each team occupies a zone. The coach begins the exercise by passing it to either Red or White (in this instance red). 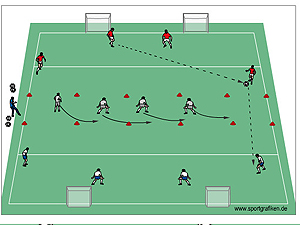 Rule:  The ball must be played below shoulder height through the middle zone. 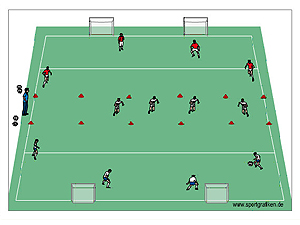 Coaching point for the defensive team:

If grey intercepts the ball a live 4v4 ensues!

If white wins the ball back they try to play to the red team.  When this happens grey returns to the middle zone.

However, if the grey score, the coach plays a ball to the red and white now enters the middle zone and grey takes over the zone white had occupied.  (pictured #4) 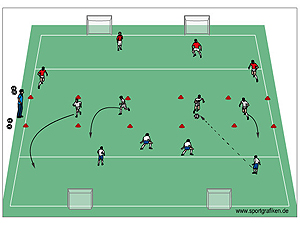 Coaching points for the Attacking teams:

Note: You only get out of the middle zone by scoring in this exercise. Gaining possession isn’t enough. If you fail to score after gaining possession or the ball goes out of bounds off your team the coach plays the ball into the opposite zone and the defending team returns to the middle. If the ball is knocked out of play by the opponent you get to resume the 4v4 with a throw-in/dribble in. 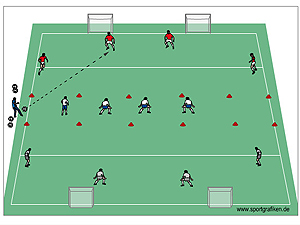 How to progress the exercise?

Note:  This scenario mirrors the game situation when a defender steps out of the backline to pressure the ball forcing the three remaining backs to get tighter to provide cover. 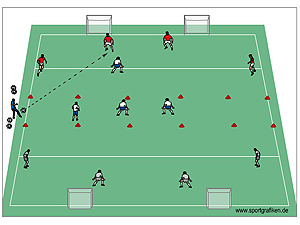 Progression:  Defending in a Box

Two players can now leave the middle zone to pressure the 4 attackers.

Rule Change: The attacking team is now allowed to play over the top (above shoulder height).

When the ball is played over the top or successfully through the zone the back of the defending box, should quickly pressure the attackers (grey) and the former pressuring white players now “take space” and return to the zone to become the covering defenders. (pictured below)

Important New Rule: The white can only defend in the zone the ball is in and the middle zone. This will force the defenders to “stay connected”. 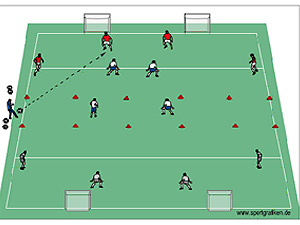 The movement of the defenders may now change with two “pressing” player’s. In the picture to the left, they are trying to squeeze the ball central into the covering players (in the mid-zone).

Note: This would really be up to the coaches’ preference on how he wants his team to defend. However, one thing that should become increasingly noticeable no matter how you choose to defend is an increased level of communication from the defending group. The players at the back should be constantly providing information to the pressuring defenders. 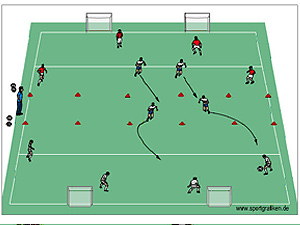