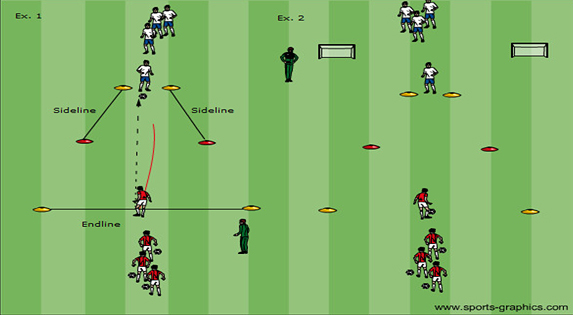 The Set-up: Create a 15 yard triangle (as pictured), Divide team into two groups, attackers and defenders (red/white). It’s not necessary to have the group divided by color, but it helps for the explanation of the exercise. The defender (Red) starts along the end-line with a ball. The attacker (white) stands at the top of the triangle.

Note: This exercise is best in groups of 6 to 8. If you have 12 players, create a second triangle.

Coach should focus on the Defender:

This is a great exercise to teach players to close the space since the slower one is in doing so the more room the attacker has to operate within the triangle.

Progression (Pictured on Right Side of the Diagram): The same exercise, but with the addition of counter goals. Now, if red can win the ball back and dribble the sideline, he or she can attack the counter goals.

Note: Coach should encourage white to defend upon loss of possession and not allow red to counter!

Rotation: Rotate from attacking to defending line, defending to attacking line or have one team defend/attack for a certain period (ex. 4 minutes) and then switch roles.