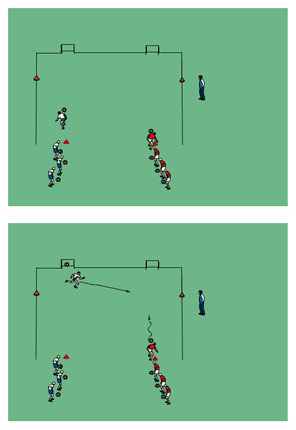 The Set-up: The field should be 15 yards long x 20 yards wide.  Designate a shooting zone 5 yards from the end-line (cones).  Use two pugg goals or create 2 two yards goals with discs if you don’t have pugg’s.  Divide team equally.  Everyone should have a ball.

The Exercise: Play begins when one player from the white line dribbles quickly and shoots the ball into a goal once he enters the shooting zone.  Once the white player releases the ball, the first player in the red line attacks either goal.  The white player should quickly transition to defense (pictured right).

If the white player can take away the goal directly in front of the red line, the Red player should cut the ball back and attack the other goal (pictured below).

Once red shoots, the first player in the white line should immediately attack the goal that is now open (pictured below).  Red should quickly transition to defend.

When the defender wins the ball you can:

This is a very demanding exercise physically.  It’s best played with 10 to 12 players.

After a player defends, he should collect a ball and rejoin his line.