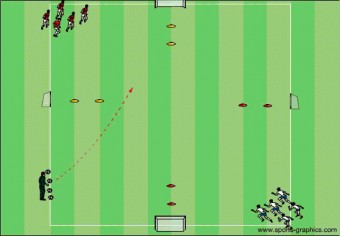 The Set-up:  On a 30×30 yard field, with 4 goals placed as pictured. Create a 3 yard gate approximately 5 yards in front of each goal. Coach should have a supply of balls to keep the exercise moving. Divide the team into half and have them start from the opposite corner of the goals they will be attacking. The Game:  Coach calls out a number (Ex. 3, a 3v3 ensues) and plays a ball out. Red attacks the two diagonal goals with the red gates in front of them. White attacks the two diagonal goals with the yellow gates in front of them. Before shooting the players Must either dribble through the gates or pass to a teammate prior to scoring. Focus:

Variation:  Same as initial exercise, but take away the gates in front of the goals.  This will make it easier to score.