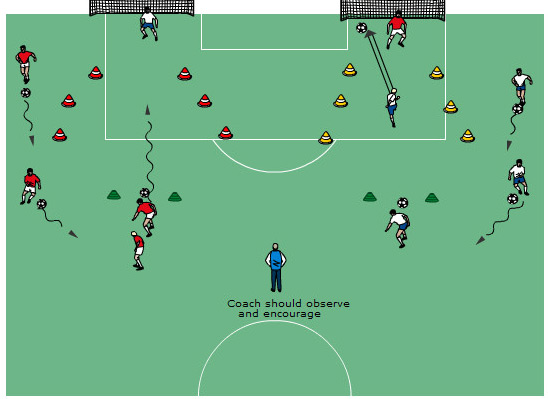 Set-up: As pictured.  Can use pugg or small-sided goals depending on age.

Player dribbles from the starting gate (green discs) and shoots from an imaginary line.  Player should begin by shooting from the closest line, if a goal is scored he/she should shoot from the next furthest line the next time.  If a player misses, he/she should shoot from the designated line a 2nd time.  If a player fails to score on two consecutive tries, they move back to the closer line.

Rotate the “Goalie” every two minutes.  Don’t allow the next person in line to begin his/her dribble until the shooter has cleared the space.

Note: Coach should not be a ball chaser.  He should observe players shooting technique.  At the closest line it may be inside of the foot “pass the ball into the net”, as you get further away it will be an instep drive.  Toe down, ankle locked.  Head steady!