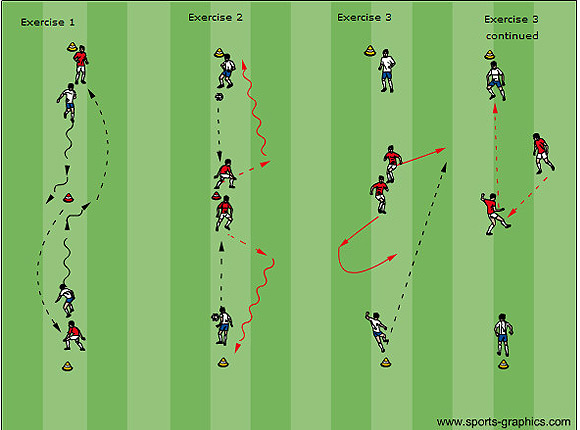 Exercise 1: Dribble, Cut, Pass- The first player in each line (white shirts) dribbles the ball toward the central disc. They MUST cut before the disc and quickly pass the ball to the waiting red player (the white players now follow their pass). The Red players now dribble at the central disc. Coach should designate which side the players cut toward so there are no collisions.

Variations: Coach can ask the dribblers to perform a particular move prior to the cut (scissors, inside-outside, etc.)

Exercise 2: Pass, Clear the Space, Attack the Line with the Dribble- Players on the outside (white) have a ball at their feet. Their partner (red) should be on his/her toes ready to receive the ball. White plays a crisp pass into red and follows his/her pass. The red player takes a first touch at a diagonal angle to “clear the space” and “attacks” the line with the dribble. Red should turn quickly when they reach the disc (or line) and white should now be on their toes prepared to receive a pass.

Exercise 3: Up Back and Through Pattern- One Player on the outside (white) has a ball at his/her feet. The two central players (red) stack up. Note: The movement is initiated by the red player closest to the ball! When the front red player breaks off at an angle toward the ball, the deeper red player moves in the opposite direction and slightly away from his/her teammate (creates better spacing). The white player on the ball immediately plays to the furthest red player. As this is occurring, the first red player “shows underneath” by curling his/her run to support his/her teammate. The deeper red player now drops the ball back to his/her teammate who plays into the opposite white player. The central players now “restack, but their roles reverse.

Rotation: Switch out the central players after 90 seconds to 2 minutes/let each group play in the central role twice.