“Ball control is the most important skill a young player could learn. Controlling the ball will simply make the game easier to play and open up more options instantly. The great thing about practicing ball control is that there are many different body parts and ways to control the ball that could prove beneficial in a game. It’s the single skill I find myself doing to this day on the practice field. I look for two things when I am controlling the ball: I find the easiest way to control the ball and I control the ball in the direction that will make my next pass as simple as possible.”

Wein is a firm believer that coaches need to offer less instruction and provide more exercise that allows for players to learn to “read the game”.  The phrase Wein uses is “Stimulate rather than Instruct”.  Instead of giving solutions to the problems the game demands, the coach should present problems for players to resolve!

The player on the ball has 3 Phases he/she must process and execute each time he is in possession.

Wein provided data that shows that the 2v1 situation occurs over 300 times in a 90 minute soccer match.  He concluded that it is much more important to teach players through small sided soccer situations where they are faced with the 2v1 situation than to play over a larger field where they get less repetition and fewer opportunities to master the 2v1 confrontations that the game presents.  It is just as important, if not more important, to teach a player when to pass as it is to teach the technical ability of how to pass.  “The pass is born out of necessity.”

Exercises to Develop Game Intelligence:  Here are several exercises that a coach can run with his/her team to develop a player’s ability to “read the game”.  It makes sense to choose two or three of these exercises and repeat them several times throughout the season opposed to trying to run a new exercise each week.  This repetition will allow for players to just focus on the soccer aspects of the activity instead of trying to learn new rules each week.

Note:  Many times a team may struggle with an activity the first time it’s introduced, but once they gain an understanding of what is being asked of them, the exercise will become much more enjoyable and productive. 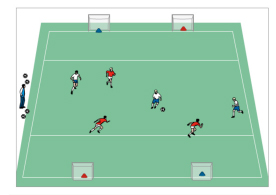 The Game:   The red attacks the red gates, the whites the blue.  No Goal can be scored unless you’re in the shooting zone!

If you score you get to keep the ball (coach plays a ball into your team).  This encourages the defenders to work hard since they don’t get the ball back when they concede a goal.

Note:  This is a very demanding game physically.  It makes sense to have 3rd team of three ready to come on (play 2 games/rest a game) or have a fourth player per team that rotates in every time a goal is scored. 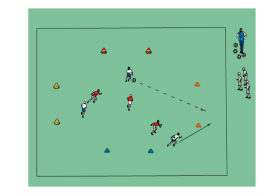 The Exercise:  Two teams of three players play on a rectangular field vs. one another to 4 gates.  Goals are scored by passing the ball through any of the four gates to a teammate.  Games are to three.  Winning team stays on.  The game does not stop when a goal is scored!  The team in possession keeps possession and tries to attack another gate. 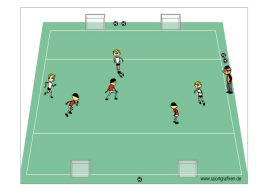 The Game: 3 white players play against 3 red players to 4 goals with an attacking zone marked off for each team.

Once a goal is scored, the player that scored is off (stands next to the coach). This creates a 3v2 situation.  (Pictured below)

Rule:  No goal counts unless it is scored from inside the attacking zone. 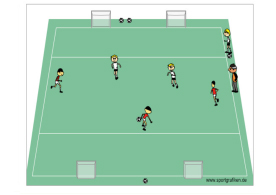 Note: This is an outstanding game in terms of teaching players how to play in numbers up and numbers down situations. 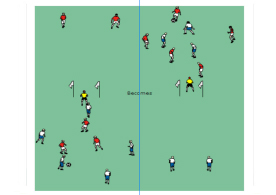 The Game: 5 Whites are playing vs. 3 Red Defenders and a goalkeeper, 2 reds resting.  Resting players should remain deep in their zone “stretching the field”.

White needs 3 passes before they go to goal (this will allow for transition as the game gets going).  When white either shoots the ball, red wins the ball, or the keeper makes a save. Play the ball quickly to the resting players & move “transition” to support. Red now is in possession 5 v3 + keeper. They need three passes before they can go to goal.

Transition: Offensively- can we support our teammates quickly?

Defensively- can we get immediate pressure?  Stay organized! 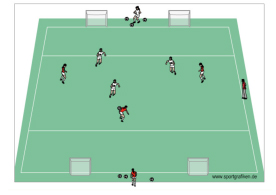 The Set-up: Divide the team into two groups of 4. One player from each team acts as a server, the other three players play 3v3 to 4

Note: If you have 12 players, divide the group into three groups of 4.  One team would “rest” and keep the servers supplied with balls.

The Exercise:  A “live” 3v3 game takes place.  You can only score from inside the Shooting Zone!  If a goal is scored, the team that scored quickly moves to take up positions to receive the ball from their server/teammate.

If the ball goes out of bounds, the team who would have been awarded the throw-in or goal kick “check’s back” to receive a ball from their server.

Play games to 3 with the winning team staying on!

Rotate the server after each game. 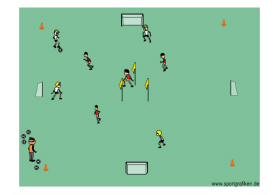 The Set-up:  On a 35×25 yard field create a 3×3 triangular goal in the middle of the area with a counter goal (discs or puggs) on each sideline.  Coach should divide the group into two equal teams (4 white v 4 red) and have a supply of balls to keep the game moving.

The Game:  Play two 5 minute periods!  In the 1st five minutes, the white team can score by shooting the ball through the triangle (along the ground) or connecting five passes.  The red team must defend the triangle and try to score in any four of the counter goals.  After 5 minutes the roles reverse. 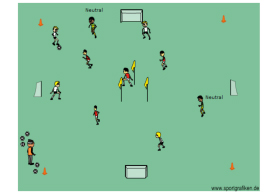 Variation 1:  Have the team defending the triangle nominate a goalkeeper (exercise is 4v3 plus keeper) and allow shots goals to score that are below shoulder height.

Variation 2:  (pictured right) Add two neutral players to the game (4v4 plus 2).  The neutral players are always on the team that has the ball.  This should make it easier for the teams to maintain possession. 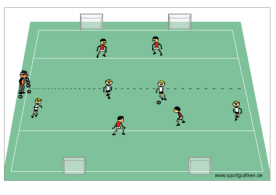 The Set-up:  A field approximately 40 yards long x 25 yards wide is divided into half.  Place two mini goals (puggs or discs) on each end line.  Divide the group of 8 into two teams of 4.  Coach should have a supply of balls.

The Game:  A white team of 4 players attacks 2 red defenders guarding a pair of goals while the other two red defenders rest.  On completion of the attack, the white players turn and receive a new ball for the coach and begin to attack in the opposite direction.  (Pictured below) 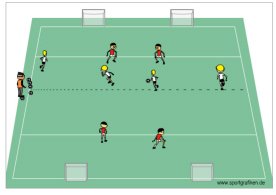 Rotation:  After 10 attacks, 5 in each direction, the roles reverse. 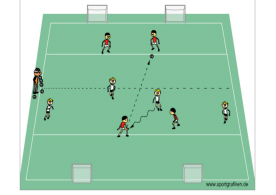 The Game:  4 white players attack 2 red defenders to 2 goals while the other two red players remain in their half.  If Red wins the ball, they must pass the ball to their teammates in the other zone.

Rotation: The Red quickly move to support their teammates and become the attacking team.  Red would now go on the attack with two white players taking up positions in each half of the field to defend.