At the 2011 National Soccer Coaches Convention in Baltimore, I had the privilege to observe Ken Lolla, Head Men’s Soccer Coach at Louisville, run a session dedicated to passing patterns.  The patterns Coach Lolla chose, although dynamic, were secondary to the information he relayed throughout the session.

Coaches are constantly seeking ways to improve the teams’ speed of play.  Can we do it quicker?  Can we do it faster?  are phrases you often hear when observing training, but Coach Lolla shared a phrase that embraces an improved speed of play while making it clear why we want our players to play quicker.  Can we “pass the time on”?   The quicker that I can receive the ball and play it to you, the more time you’ll have to do something productive with it.  If we all can be efficient with the ball, prepare it and play it quickly we build up more & more time for our teammates. 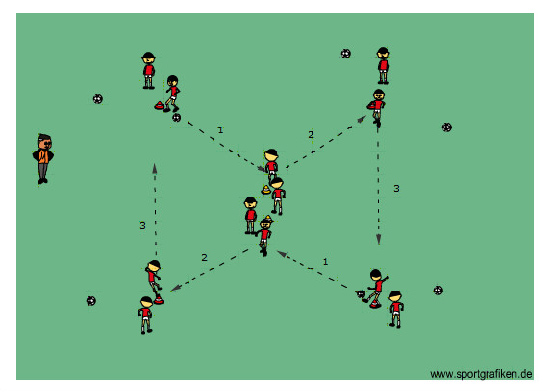 The Set-up: (as pictured).  Have at least two players start at each disc.

The Pattern: The ball is entered into the middle, the middle player receives and plays to the opposite corner, this player now quickly receives and passes straight across to the other side.  All players should follow their pass.  Begin with two balls.  You can add a third ball if the skill level of the group can handle it.

Note: Place several balls around the area.  We are encouraging the players to move the ball around the grid as quickly as possible.  Acknowledging that playing at a high speed is the goal, mistakes are going to happen.  This is how we grow.  Ask the players as a group to get a replacement ball back into play as quickly as possible.  The group is responsible for this (team accountability) not just the player who made the mistake.

After 4 or 5 minutes, reverse the direction of the pattern.

1.       Must check away before receiving the ball- Prepare the space you want to receive it, by drifting away

2.       Must meet the ball- Can we separate from the defender (disc)even if it’s just a step or two

3.       Must have a look to the next guy before receiving the ball- know where you’re going to play next

Progress to: Same circuit as above, but with the addition of two connecting players.  These players should remain open to the field (side on) which mirrors the positioning of a wide midfielder.

The same five rules apply to the circuit. 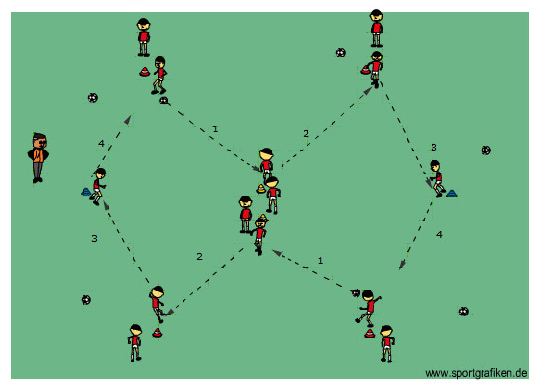 Final Progression: The wide player now drops the ball back to the player he/she received it from and spins away (opens up the passing lane) and sprints to the next line.  The player who passes the ball should remain as the next connecting player. 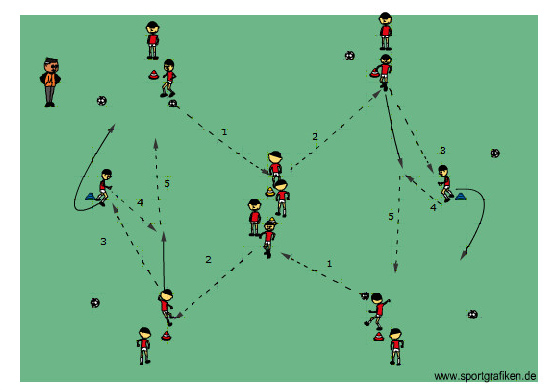 Coach should be observing: