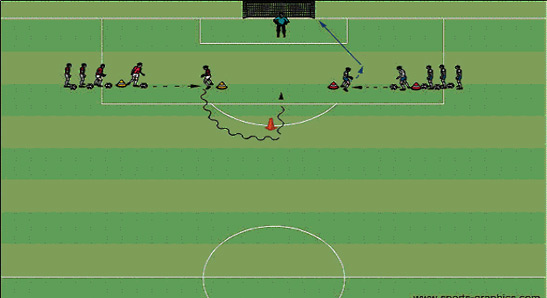 The Set-up: Divide team into two groups (Red &White) with each group having all players in a line with balls with the exception of one player that stands approximately 5 yards away and facing his/her group without a ball. An additional disc is placed at the top of the penalty box arc.

The Game: When the coach (or the keeper) calls go. The first player in each line passes the ball to his/her teammate. The white player prepares the ball and shoots as quickly as he can.  The red player receives the ball and immediately dribbles around the disc at the top of the arc and takes on the white player (shooter) in a “live 1v1” to goal. The passers now move forward to the open disc and face their line.

Variation: Players in line have the ball in their hands and toss the ball to their teammate.  This will increase the difficulty level of the reception.