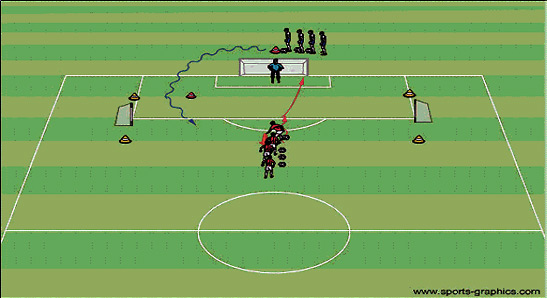 The Set-up: Create a small field approximately the length of the penalty area x 12 to 15 yards wide. Place mini goals on each end-line. Divide team into two groups (Red &White) with each group having all players in a line with balls. The red group stands approximately 25 yards from and facing the big goal. The white group starts directly behind the goal (if there isn’t space-adjust the starting position). An additional disc is placed along the sideline a few yards from the end line.

The Game: When the keeper or coach calls go. The first player in each line begins dribbling the ball. The red player shoots the ball as he approaches the top of the penalty box. The white player dribbles the ball at speed around the disc placed along the sideline and takes on the red player (shooter) in a “live 1v1” to mini-goals.