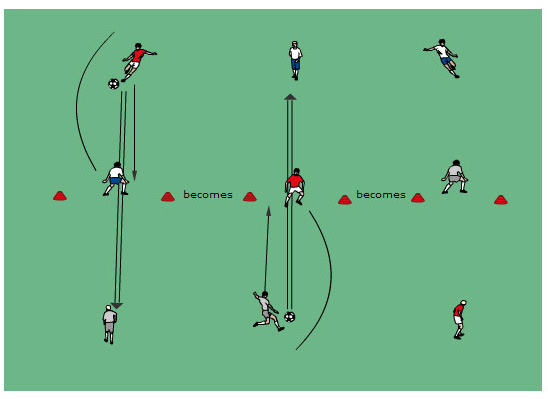 The Exercise: Red drives the ball with his instep (laces) through two discs or flags to grey, white should initially serve as a passive goalie and become more active as the exercise progresses. Red and White would then switch positions. Grey should immediately prepare the ball as quickly as possible and accurately drive the ball between the 2 discs “guarded” by Red. Grey and White would now switch positions. Exercise continues.

Possible Variations: Ask the goalie to be fully active, ask the players to drive the ball along the ground, ask players to chip the person in the middle. Ask players to land on their kicking foot (follow through).

Coach should focus on Proper Technique for instep:

Observe how the players’ approach the ball. It shouldn’t be a straight line, instead a slightly angled approach similar to that of a field goal kicker.