Before deciding on “What system to play” or focusing on your team defending you must recognize that defensive success is first and foremost based on quality 1 vs. 1 defending. Getting pressure on the player with the ball is vital if the rest of the team is to carry out their defensive responsibilities. Only when this pressure takes place can the remainder of the players get “compact” and take away space from the attacking team. There are three key principles to successful 1 vs. 1 defending:

Something to consider- One of the best times to win the ball back is in the moments after you’ve given away possession. If you can get immediate pressure on the ball from the defensive player closest to the ball, often the player who just lost it, the attacking team won’t be as organized and will likely turn the ball over. In a worst case scenario you can eliminate their ability to play forward.

Summary: As you can see the role of the first defender is vital to the success of team defending. If we do a poor job in applying pressure to the ball and taking away the attackers options the whole defensive system will suffer. It is very important that we spend time teaching each player the principles of individual defending. The 1 vs. 1 is the foundation of the game. This doesn’t just apply to the attacking principle, but defensive as well.

Here are a couple of exercises to teach proper 1v1 Defending appropriate for all ages. 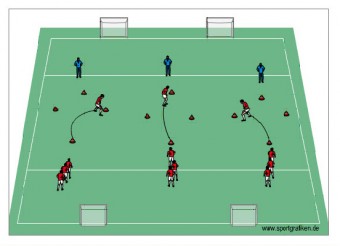 The Set-up:  Create several 4×4 Diamonds. 4 to 5 players per Diamond.  Coach should position him/herself in a manner to observe the players movement.

The Exercise:  The first player in line moves quickly out to the first disc (the discs represent the ball).  The movement should be made:

Variation:  Same exercise, but now the defender should close the space, give ground, take ground. 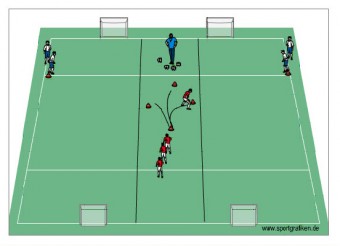 The Set-up:  Remove the outer diamonds and create two long narrow fields with goals on the end-line.  Divide players into 3 groups (as pictured). It’s not necessary for the players to be in different colors, it just helps for clarity in explaining the exercise. Coach should have plenty of balls.

The Exercise:  The defending player moves through the Diamond in the same manner as the original exercise: closing the space; steering the attack, recovering facing the ball.

Once the defender begins to recover from the 3rd disc, the coach should play a ball to one of the attackers. The defender should move quickly to close the space on the attacker and a “live 1v1” ensues. 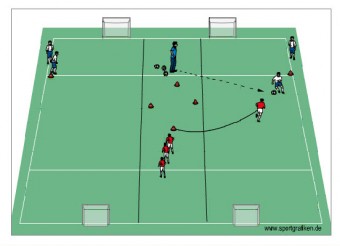 The next player in line should begin to move through the defensive diamond immediately! Coach can yell Go! To initiate the movement, but ideally the players will move once the ball has been played into one of the channels.

Once the defender begins to recover from the 3rd disc, the coach should play a ball into the opposite channel. (not pictured) 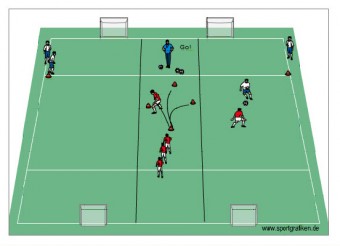 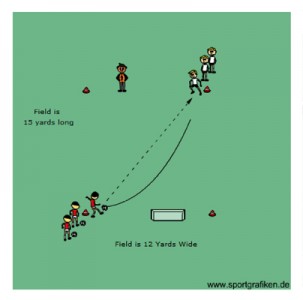 The Game:  Red plays the ball out to White.

Attackers should be daring and take the defender on. If the defender is slow to seal off the goal the attacker can shoot directly in to the pugg goal.

If the defender wins the ball, he/she should attempt to play the ball to the coach. This will teach the defender to get their head up and look to play forward immediately.

Variation:  Change the location of the goal, change where Red plays the ball from.