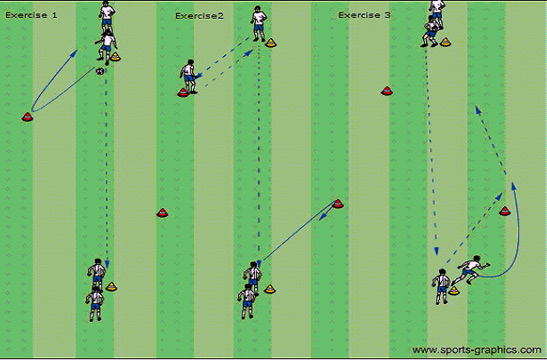 The Set-up: Groups of 4 to 6 players. Place two yellow discs 15-20 yards apart with a red disc approximately 5 to 7 yards diagonally from the yellow disc. One ball per group.

Exercise 2: Same movement as initial exercise, but now the player “holds their run at the red disc to offer a 1-2 with their teammate before returning to their line. Play one touch if possible.
Focus: Crisp passing, Timing of runs, Combination Play

Exercise 3: Begin with a long crisp pass across to the opposite line. The first player in the receiving line should feign receiving the pass, but instead sprint around the red disc. The second player in line should pass the ball diagonally into the path of his teammate. This player should return the pass to the initial line, where the first player feigns reception and sprints around their red disc and receives pass from his/her teammate.

Note: All players return to their own line.