One of the dangers of teaching positions to young players is that kids can view a particular position to be a stationary spot on the field and not an active part of the team. I have chosen to explain the idea of teaching positioning while using the right back, but the continuous movement in relation to the ball or other teammates is applicable to all positions on the field. Also, I chose a position at the back since I often find players at the back to have the most difficult time viewing the game in a larger sense both when their team is in possession of the ball or the opposition is in possession. Although the diagrams are in the 8v8 format the same principles will apply to the 6v6 or 11v11 game. Let’s look at a number of situations involving team shape and in particular how it relates to the right back.

Possession in the final third of the field: 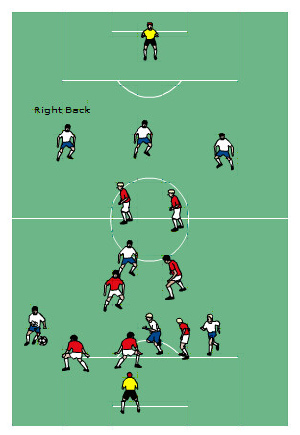 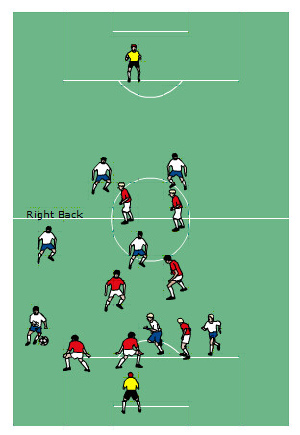 The situation (pictured above left) often happens with young players and should be discouraged. In this picture the right wing has the ball and has limited options of support. If your team is in possession of the ball in the opposition’s end of the field:

Note: The winger, with support from the right back, doesn’t need to force a pass into an area covered by the defense. Correct positioning right: By moving into a better and closer angle of support the right back does several positive things for his team.

Note: Observe the movement of the other two defenders as the right back moves forward.  They aren’t stationary, but slide over to cover the space the right back vacated when he moved forward. 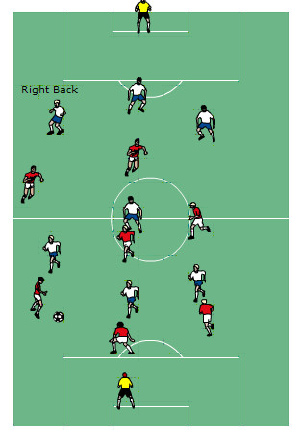 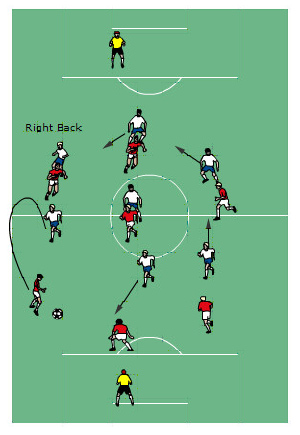 Let’s now look at the positioning of the right back with the ball in the same location, but with the opposition in possession. In the picture (above left), the defensive team is too spread out which allows the opposition more space to play through. Many young players believe, incorrectly, that they are helping their team more by staying closer to their own goal, but in reality the opposite is happening. If the ball is played forward into an attacking player, that player will have time to gather the ball under control, turn with it and run at the defense. This can have disastrous consequences! Below is a better example of how to defend. In the picture (above right) the right back gets tight to the near side forward. By “getting tight” the right back will:

Note:  Notice the movements of the other players as well.  All defensive players should move in relation to where the ball is located.  The players that are “ball side” should get tighter to the attacking players, while the players on the “weak side (furthest away from the ball)” should pinch in and move further away from the attacking players in an effort to deny the attacking team space to play through.  The space that is now available to the attacking team is behind the defense, but if we have the goal keeper move higher off his line (pictured above) and teach our defenders when to “fall off” these long balls will be easily recovered. Continuing with the defensive theme, let’s look at the movement of the right back as the ball is passed from the opposition’s central defender to their right back.  (Pictured below) 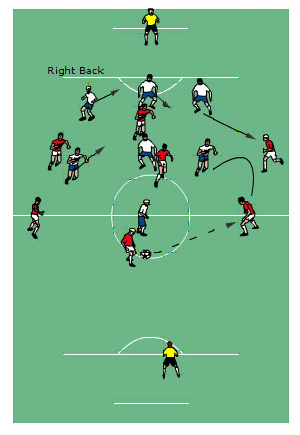 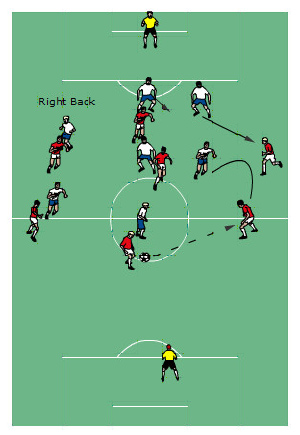 Notice how the right back doesn’t remain in his initial position, but shifts over or “pinches in” to a more central position. This keeps the team balanced. The players on the ball side now “tighten up” with the attacking players (marking), while the players on the “weak-side” deny space and provide “cover”. Note:  Defensive shifting should be done as the ball is traveling not after it has already arrived to the player in possession.  Incorrect defensive positioning of the right back is picture right. If the right back remains too concerned with the forward or wing player on the “weak-side”, it will unbalance the team and open up a diagonal gap for the opposition to attack.  It is vitally important that young players understand that “staying connected” with their teammates and covering space can often be more important than marking a player.

In Conclusion:  There is nothing wrong with teaching your players positions, but the player/coach must be careful not to view a particular position to be a stationary spot on the field.  A player’s positioning is constantly changing with the location of the ball and the opposition.  Although I chose to focus on the right back to help clarify a players movement or positioning, all positions on the field have the same principles apply. On the attack players should position themselves in a manner where they can support the ball, stretch the field, keep the team balanced or protect teammates if a loss of possession occurs.  When defending, players should be either pressuring the ball, denying space to play through or covering for teammates and keeping the team balanced. There is no steadfast rule of how to play, or where a certain player should be at a particular time, but it must be clear that the game is not stationary and a defender has roles in the attack as well as defense.  The same holds true for an attacker. I hope you find this article helpful in terms of teaching positioning and what to look for as the game unfolds. [Download this excercise] Best Wishes, Brendan bdonahue@lexingtonunited.org