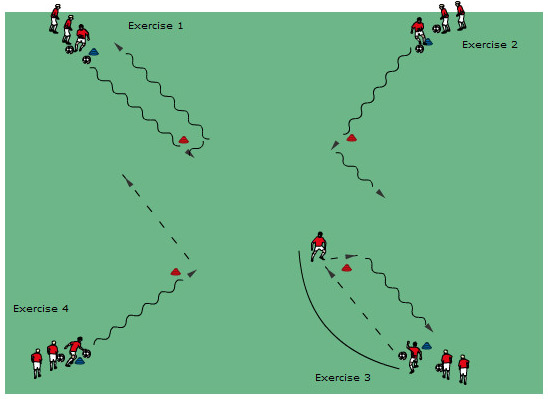 Note: All groups should be participating at the same time.

Exercise 1: Dribble in, in a controlled manner, around the disc without touching it, and accelerate back to your line.  Once the first player begins to accelerate back, the next player in line dribbles in to the middle.  Note: Coach should designate which side the players dribble toward the disc from, lessons the chance of collisions with teammates.

Exercise 2: Dribble in to the right side of your disc, accelerate to the next line.  Continue until you get back to your line a 2nd time.

Variations:  Same thing, but the other direction, full circle around the disc before accelerating to the next line.

Variations:  Change the side of the disc the player is standing at, have the ball in the hands of the players in line and toss the ball to the thigh, chest, head, etc.

Exercise 4: One ball per line.  Dribble in and around disc, pass the ball to the next player in the line and run to the end of the new line (same as exercise 2, but you’ve added a pass)

Variation:  After you pass the ball, move to support, players need to combine before they go into the middle.  Change direction of the movement.