Note: There will be a lot of movement in this exercise, but it is fairly straight forward once the players get the rhythm sorted out.  The upper line should use two touches (receive & pass).  The return pass to the lower line can performed one touch.

The ball at the top will always travel back and forth with the line directly across.

The balls in the bottom two lines will always go to the middle and be returned directly to their own line.

Note: These movements are happening simultaneously. 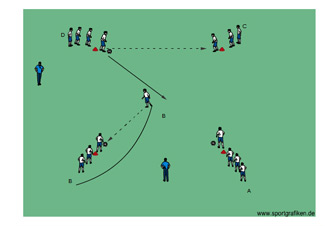 Player B passes the ball directly back to the next player in line (player D has already moved up to join the upper line).

The player from the first line makes a diagonal run looking for the ball from the lower line. This is the same as the 1st movement.

This is a great exercise once the players understand the movements.  Be patient, it’ll be worth it!