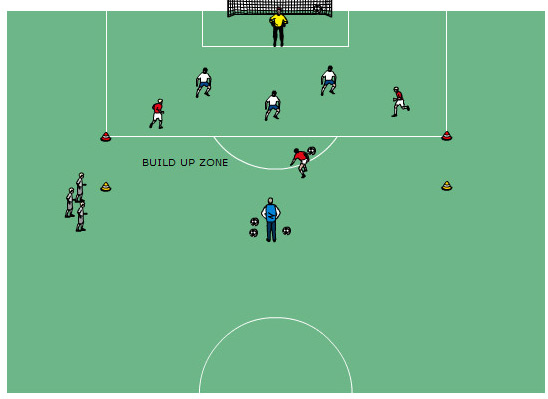 The Set-up: Extend the penalty box by 5 to 7 yards. Divide the teams into 3 equal number teams (anywhere from 2v2 up to 5v5 works). Have several balls divided between the coach and in the net.

The Game: Two teams play, the third team rests (shags balls). The attacking team (pictured in Red) is allowed to drop back into the “Build up zone” (5 to 7 yard zone on the edge of the penalty area), the defending team is not allowed in this area. Red is not allowed to shoot the ball from the build up zone. However, they can move the ball around in this area to open up gaps in the defense. You must be in the penalty box to score a goal. If the defense (white) wins the ball they need to play the ball into the coach or successfully dribble into the “build up zone”. The roles are now reversed, white attacks, red defends. If the goalie makes the save he/she plays the ball out to the defending team who needs to clear the line before the roles reverse. This will force the team to learn to build out of the back.

Play games to 3 with the winning team staying on.