The Set-up: On a 36x 30 yard field (double penalty box length) divide the group into two equal teams.  Create three 5×5 boxes as pictured.  Have the two lines directly across from one another facing the central square.

Balls should begin with the goalkeepers.

This exercise works best with 10 to 12 players.

The Exercise: When the coach yells Go!  The first player in each line sprints into the square and “opens up” into a wide position in their lower right hand box.

Note: When the player moves from the central square to the lower corner square, they should begin to position their body in a way that they can begin to see the field.

The goalkeeper distributes the ball firmly along the ground to the players “front foot”.

The player now dribbles the ball at speed toward the opposite goal and takes a shot.  The shot should be taken prior to the player being in line with the lower line of the central box.

The Set up: Same, but now all the players in line have a ball at their feet.

The Exercise: Same as the initial exercise, but now the players must dribble into the central square, perform a sharp turn, pass the ball to the keeper prior to “opening up”.

This will force the keeper to deal with a back pass and distribute with their feet. 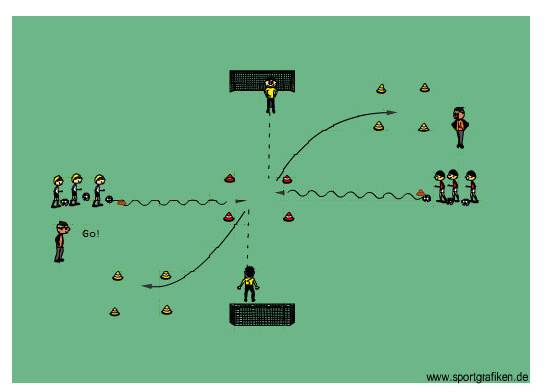 Additional Coaching point: As the player moves from the central to the lower corner box and the goalkeeper is playing them the ball, ask that they look over their shoulder to the goal that they are going to be attacking.  “Can you take a look at the space you’re looking to attack next before the ball arrives?”

This is a great habit for the player to develop!